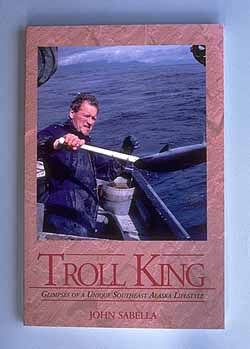 Troll King, Glimpses of a Unique Southeast Alaska Lifestyle is the story of salmon troller Keane Gau, for whom the business of stalking salmon with hook and line was more than simply a profession. For Gau and his family, the salmon industry was both livelihood and all-consuming way of life.

As a boy, Gau was inspired by the book As the Sailor Loves the Sea that he found on his grandmother’s bookshelf. He endured life ashore until 1955, when the childhood dream inspired Gau and his wife Helen to sell their Eastern Washington tavern and launch careers as fishermen. They bought the sailing yacht Eileen O’Farrel, lashed on a set of trolling poles and set out to fish the coast of Washington with two toddlers and an infant aboard.

“Unmitigated gall!” That’s what the Helen of twenty-five years later said it took for the family to survive and prosper. “Of course,” she added, “God protects fools and fishermen.”

“You’re nuts! And you’re going to kill those kids!” That’s what their family and friends had to say. Their parents never really forgave them, giving up a good business and the security of terra firma. And for what? For a harebrained fantasy of making a living off the sea, with three little kids yet. Why they didn’t even have a real boat, they had a goddamned yacht with trolling poles stuck on the sides. And they’d never even been on a boat ride! They were inland people! Lunacy!

They had caught a grand total of five salmon on sport poles when they declared themselves commercial fishermen. And, with the business to learn and the sea to contend with, Keane also had a terrified wife on his hands.

“I’m surprised he didn’t tell me to go jump in the lake,” Helen admitted later. “I was so uptight about the kids. That’s why I say it takes a special kind of man to have his family aboard a fishing boat. “Now, I tell the young wives in the fishing fleet, ‘Hang in there. Part of your fear is for your kids.’ Then, when the kids learn to take care of themselves, the fear goes away.”

And this was something Keane had always dreamed of, she said. “That’s important for a man. There’s nothing sadder than to see a man go off every day to a job he hates.”

Prosper they did. The Gaus became accomplished fishermen and leaders of their industry. Gau, the simple working man, became as conversant with international markets and currency exchange ratesas with diesel engines and octopus hootchies. His wife became the first female to hold high positions in fisherman’s organizations that had always been fiercely and exclusively male.

When their fishing fortunes permitted, the family unshipped the trolling gear, raised the dacron and spent years cruising tropical latitudes. Because theirs were working vessels rather than merely yachts, they formed unique bonds with the local inhabitants of exotic climes, trading wisdom with regard to wresting a living from the sea.

The Gaus are gone now, but their legacy of hard work and sunny optimism will linger long within the fishing industry and the coastal communities of Washington and Alaska. These unpretentious, hard-working people were among the most remarkable individuals in the minds of all who knew them, and this is their story.